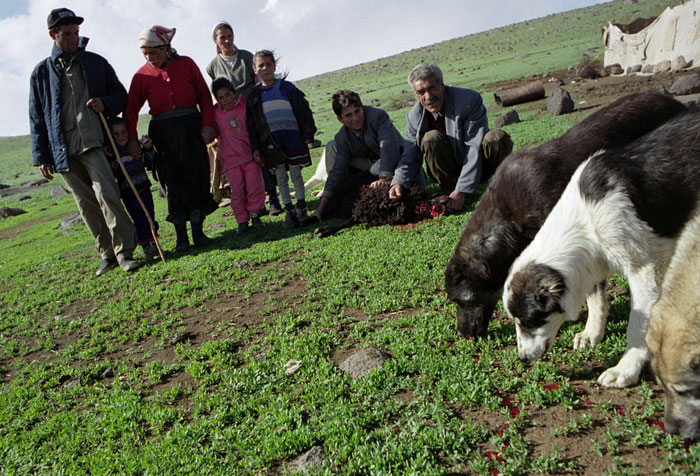 
Demons of the Past
The Armenian Genocide and the Turks

The month of April marks the 95th anniversary of the start of the Armenian genocide. An unusual television documentary shows what motivated the murderers and why Germany, and other countries, remained silent.

Tigranui Asartyan will be 100 this week. She put away her knives and forks two years ago, when she lost her sense of taste, and last year she stopped wearing glasses, having lost her sight. She lives on the seventh floor of a high-rise building in the Armenian capital Yerevan, and she hasn't left her room in months. She shivers as the cold penetrates the gray wool blanket on her lap. "I'm waiting to die," she says.

Ninety-two years ago, she was waiting in a village in on the Turkish side of today's border, hiding in the cellar of a house. The body of an Armenian boy who had been beaten to death lay on the street. Women were being raped in the house next door, and the eight-year-old girl could hear them screaming. "There are good and bad Turks," she says. The bad Turks beat the boy to death, while the good Turks helped her and her family to flee behind withdrawing Russian troops.

Avadis Demirci, a farmer, is 97. If anyone in his country keeps records on such things, he is probably the last Armenian in Turkey who survived the genocide. Demirci looks out the window at the village of Vakifli, where oleander bushes and tangerine trees are in full bloom. The Mediterranean is visible down the mountain and in the distance.

In July 1915, Turkish police units marched up to the village. "My father strapped me to his back when we fled," says Demirci. "At least that's what my parents told me." Armed with hunting rifles and pistols, the people from his and six other villages dug themselves in on Musa Dagh, or Moses Mountain. Eighteen years later, Austrian writer Franz Werfel described the villagers' armed resistance against the advancing soldiers in his novel "The Forty Days of Musa Dagh."

"The story is true," says Demirci. "I experienced it, even if I am only familiar with it from the stories I was told."